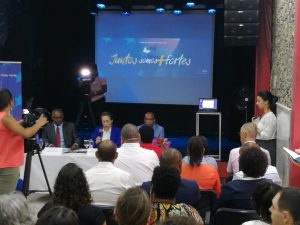 IMVF participated in the ceremony of public presentation and signature of 5 new contracts for projects financed by the European Union worth 2.5 million euros to be implemented in all Cape Verde islands. The event took place on the morning of February 13th at the Palácio da Cultura, Ildo Lobo, in Praia.

These projects aim to support and strengthen Cape Verdean civil society, as a sustainable development actor, in the promotion of rights, the active participation of women and young people, and the protection of children in vulnerable situations, and will be implemented in partnership with local authorities and Cape Verdean associations.

This was followed by the presentation and subsequent signing of contracts for projects funded under the Thematic Programme for Civil Society Organisations and Local Authorities 2019/2020, which were selected through an open call for tenders launched in April 2019.

IMVF, with the financial support of the European Union and in close partnership with the Cape Verdean Federation of Associations of People with Disabilities and SOLMI – Association for Support to Self-Promotion Initiatives, will develop activities in favour of children and young people with neurological disabilities in the framework of the project to Promote the Inclusion of Children and Young People with Neurological Disabilities, on Santiago Island, with nationwide awareness raising actions that will start in May 2020. The IMVF was represented at this ceremony by the deputy director of projects, Hermínia Ribeiro, who mentioned “the importance of involving all the national reference entities in the sector of intervention in the preparation of the proposal. Two face-to-face meetings and several conversations via Skype were held in order to have a proposal that corresponds to the real national needs”.

The closure was attended by the Head of European Union Cooperation in Cape Verde, José Roman Leon Lora.