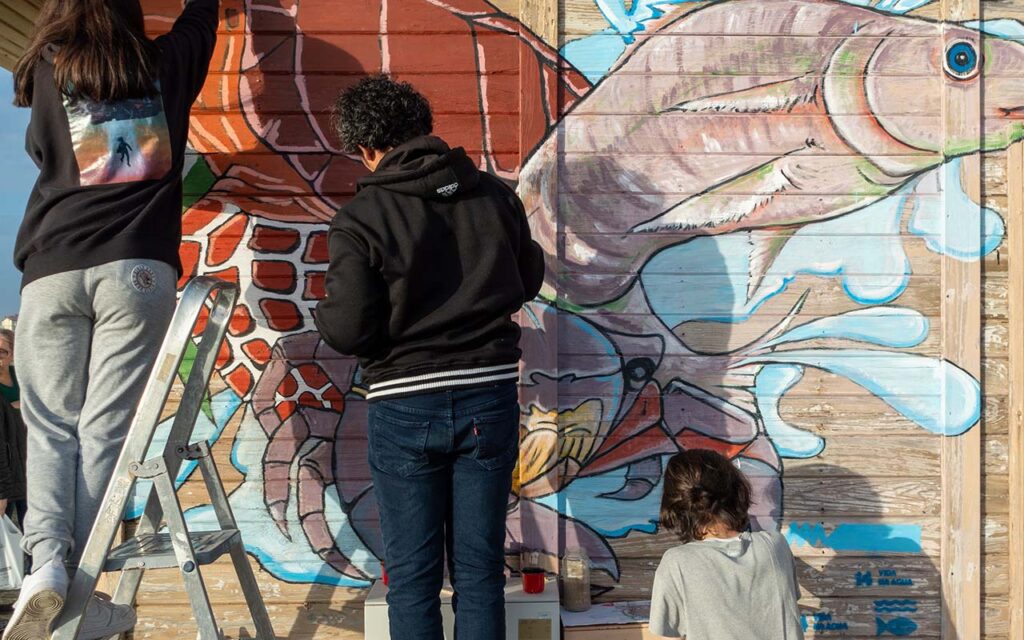 The People & Planet project could not have started its third year in a better way: with the first transnational artivist action. In Portugal, the project welcomed the Nicaraguan mural artist Manuel Aláníz, from the Fundación de Apoyo al Arte Creador Infantil (FUNARTE), a nonprofit organisation that focuses on the social transformation of children and youth through art.

Taking advantage of Manuel’s stay in Europe through LBSNN, one of the Dutch partners of the project, we organised several actions in Portugal with the mural artist. This was a great occasion to learn more about international practices of working with young people for sustainability through art.

The adventure started in Matosinhos, where several groups coming from the Secondary School of Boa Nova (Escola Secundária da Boa Nova) joined a wall painting of the Dunes House (Casa das Dunas) – this is a place where the municipality leads several actions of environmental education. Despite the bad weather, young people were persistent and, together with Manuel, finished an homage to water and sea life, which can now be seen from the walkways of the Memory Beach (Praia da Memória).

Next stop: Miranda do Corvo. In partnership with the municipality and the Basic and Secondary School José Falcão (Escola Básica e Secundária José Falcão), we organised a workshop with arts students, that was visited by the vice-presidente of the municipality Marilene Rodrigues. Students created art pieces of their own making that reflected their concerns and expectations with regards to climate change, now exhibited at school. To be noted that the region suffered significantly in the last summer from water scarcity and wildfires.

Some steps further south, we met with students from IPTrans the following day, a school that is not unfamiliar with the People & Planet. We organised a new atelier here with Manuel, during which young people expressed their expectations for sustainable development through art.

As a last action, People & Planet and Manuel went to Amadora to join the school group Mães d’Água and Miguel Petchkovsky, artistic director of the action ‘Water Line’ (Linha de Água), supported by the project. During the full day, students joined the facilitators in creating a wall painting that celebrates the importance of water, and were visited by Councillor Ricardo Franco Faria.

This week confirmed the potential of art in the fight against climate change and towards sustainable development. Art and creative actions are one of the approaches that allows to involve people in a more participatory way and to create real mobilisation. This is why the project will keep investing in this type of actions.