The Brigadier General César Augusto Parra León, former commander of the 6th Division of the Colombian Army and current Head of the Planning and Transformation Department of the General Command of the Colombian Military Forces was received at IMVF headquarters, on March 12, 2019.

On that day, Paulo Freitas, IMVF´s Administration Board President, was presented with a recognition medal by the Brigadier General César Augusto Parra León for the work that IMVF has been developing in Colombia through the project Sustainable Territories for Peace in Caquetá.

During his visit to Portugal, which ran from March 11 to March 16, Brigadier General César Augusto Parra León was the keynote speaker at the conference “Colombian FAs and international cooperation in the peacebuilding process: environmental challenges in the Colombian Amazon Region” held on March 14, at the Camões, I.P. auditorium. 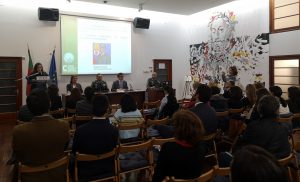 conference, moderated by the professor and researcher Filipe Vasconcelos Romão, was attended by the IMVF representative, Vera Vasconcelos Abreu, who presented the progress of the project “Sustainable Territories for Peace in Caquetá”, as the first project of the Portuguese Cooperation and IMVF in Colombia, financed by the European Union Trust Fund for Peace in Colombia, by Camões, I.P.; apart from comprising resources from local authorities and Portuguese companies.

It should be noted that the Colombian National Army is an important ally of the project. Due to the contribution of skilled labor and specialized machinery provided by the National Army Engineer Battalion, as well as to the strategic partnership with the Portuguese company Mota-Engil, which donated construction materials, it was recently possible to carry out infrastructure improvement work on road access – one of the fundamental components of the project, which is complementary to the productive component – providing the improvement of the agricultural products flow and the life quality of the inhabitants.