After 10 years of independence and three years of relative peace and social stability there is now a need for more involvement and coordination amongst stakeholders to guarantee a transition of a post conflict East Timor to effective development.

The declaration of the East Timorese Government “Goodbye conflict, welcome development” reflects the aspiration for sustainable development. The capacity-building of local power has been a priority of this young democracy that from the onset recognised the importance of decentralisation as a previous condition for the exercise of citizenship, good governance and local socioeconomic growth.

Overall: contribute to poverty reduction and peacebuilding in rural areas of East Timor

Specific: strengthen collaborative relationships between Non State Actors and State Actors in the field of Rural Development in East Timor

Indirect: rural communities of the 13 districts, approximately 77% of the population.

•  Preparation of 1 diagnostic study in the initial phase of the project on the HASATIL Network: many of its members were inactive or disappeared
and focused mainly in Dili. With the project, HASATIL attained national dimension. In each district, a member organisation was selected and took benefit, taking over the role of focal point of the Network;

•  Implementation of 1 Common and Individual Training Programme, having been carried out 11 training modules in class and guaranteed the
individual support to each network’s focal point. This training allowed for knowledge consolidation and working methods;

•  Organisational and technical empowerment of 15 rural civil society organisations, which now have a structured strategic plan, a clear plan of action and important communication tools that can support them in establishing new partnerships;

•  Institutional strengthening of the Network with (i) the support of General Member Meetings; (ii) capacity building in associative movement and
institutional representation, bringing together the members of the network and its secretariat, in Dili and (iii) the production of technical reference
documents and members consultation, enhancing HASATIL ´stand concerning national interest issues, such as the revision of the National Policy
on Food and Nutrition Security; the operation of the Interministerial National Council for Food Security and the Fome Zero (Zero Hunger) Programme;

•  Enhancing collaboration between HASATIL and State and non -State bodies through the increase of communication channels and sharing of information between HASATIL and several national and international stakeholders, including the invitation addressed to HASATIL for a permanent seat at the Secretariat of KONSANTIL (Food Security Council of East Timor);

•  Fostering of moments of debate and consultation between civil society and the Timorese Government with a focus on promoting Food and Nutritional Safety and Sovereignty, including (i) 1 International Seminar, on the occasion of the CPLP Summit, in Dili; (ii) exhibition of the work of HASATIL members, in Dili, bringing new products and work experiences to the capital and (iii) the support to a greater coordination between members of HASATIL in the districts and the District Directorates of the Ministry of Agriculture and Fisheries; 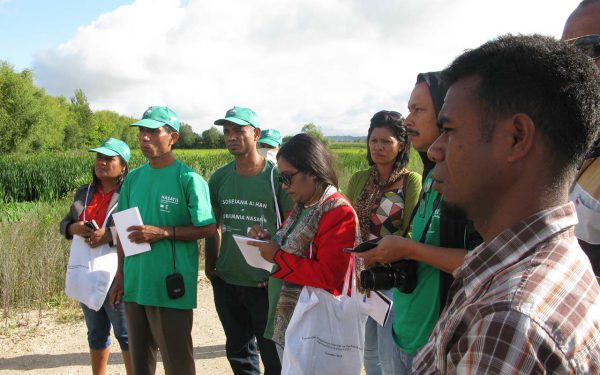